Ducal Palace
The Ducal Palace is a wonder of architecture that perfectly encapsulates the concept of Mathematical Renaissance, a concept developed in Urbino during the second half of the fifteenth century by order of Federico di Montefeltro. The Palace is the result of a philosophical approach combining mathematics, geometry, astronomy, astrology, and art. It sets itself apart from any other in Europe because it is not a fortress, but rather a cultural meeting point, characterized by its unique Torricini, the two towers that reach for the sky in an open dialogue with the Divine.
Today, the Ducal Palace houses the National Gallery of the Marche. Its collection of artworks includes Portrait of a Lady (Ritratto di Gentildonna), also known as La Muta, by Raphael; The Flagellation of Christ (La Flagellazione) and Madonna di Senigallia, by Piero della Francesca; The Ideal City (La Città Ideale) and Miracle of the Desecrated Host (Miracolo dell’Ostia Profanata), by Paolo Uccello; The Last Supper and The Resurrection, by Titian; and numerous other masterpieces. 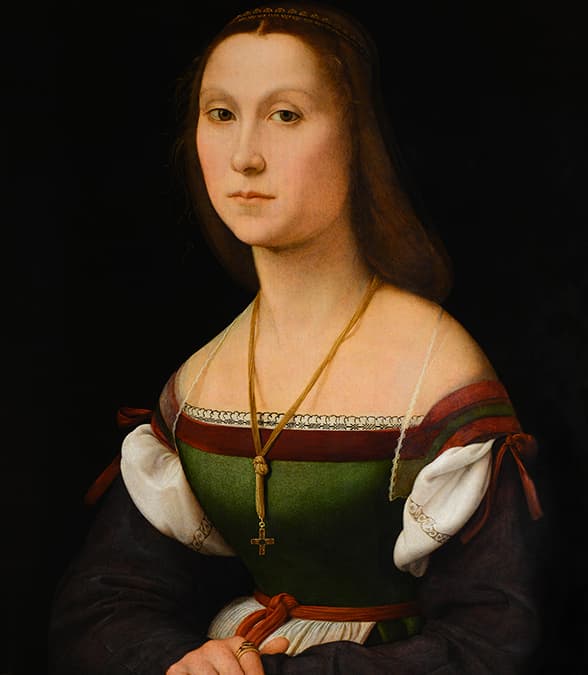 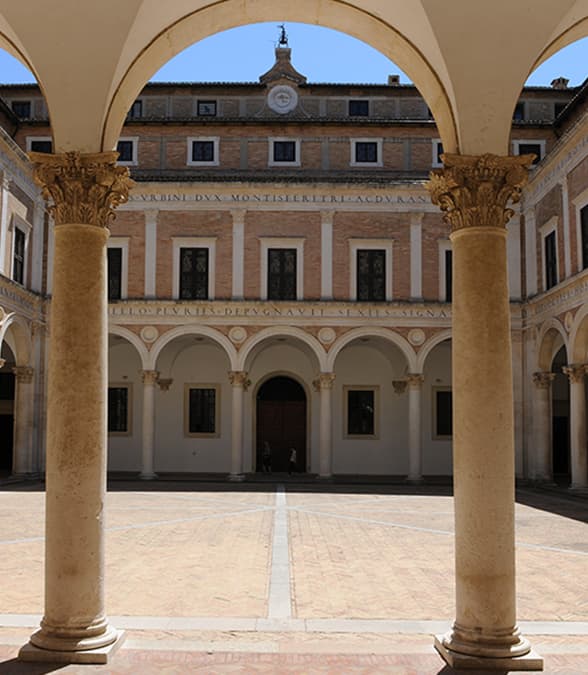 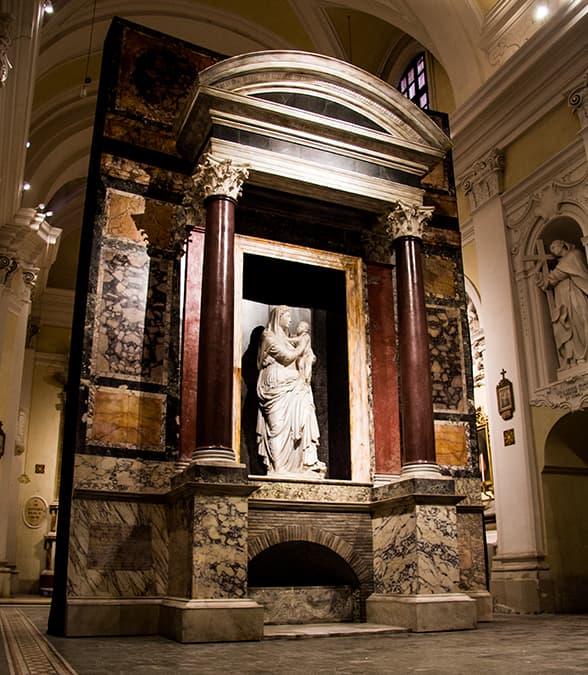 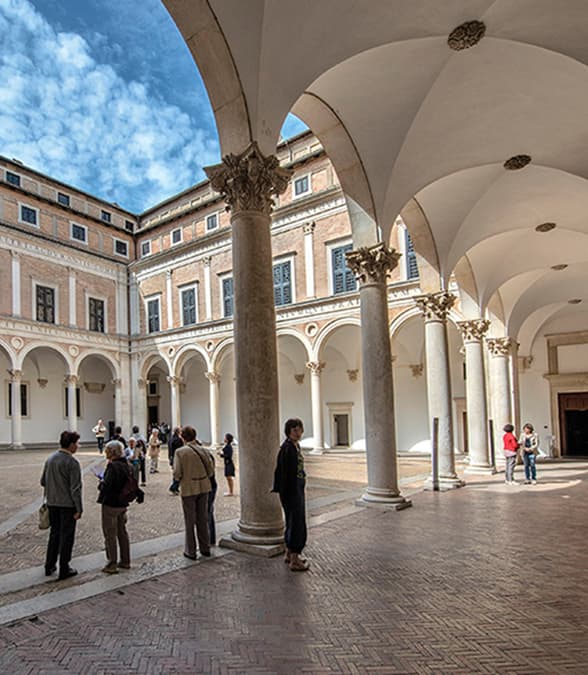 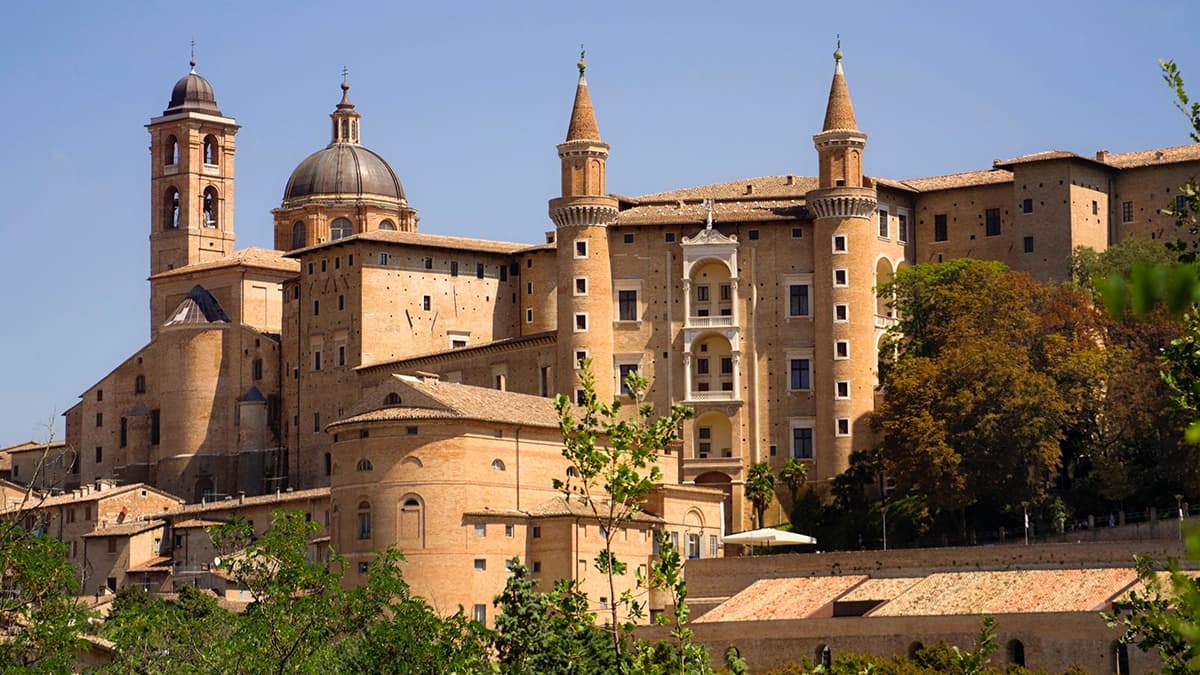 Raphael’s Birthplace
On visiting Urbino, you must not miss the opportunity of entering Raphael’s Birthplace, driven as you will be by the wish to find links between this place and its genius. Your expectations on visiting an artist’s home may not be lived up to, and yet you will experience exactly what type of environment into which Raphael was born: a large house belonging to a wealthy family with a workshop that gives straight onto the street. This is the workshop where Raphael learned the very first elements of drawing and painting in the company of apprentices and other artists who gathered there. Inside the house, you can admire The Virgin and Child, considered the very first example of the painter’s art. Copies, forgeries, paintings of incorrect attribution, and majolica objects give you an idea of how widespread over time and space the myth of this artist of exemplary perfection and grace was. The Museum of Raphael’s Birthplace reveals the way in which from the nineteenth century onwards a cult and veneration grew up around Raphael laying the foundations for the creation of the Academy which is dedicated to him, becoming the custodian of gifts and promoter of the purchase of the house itself and the erection of the monument to Raphael. 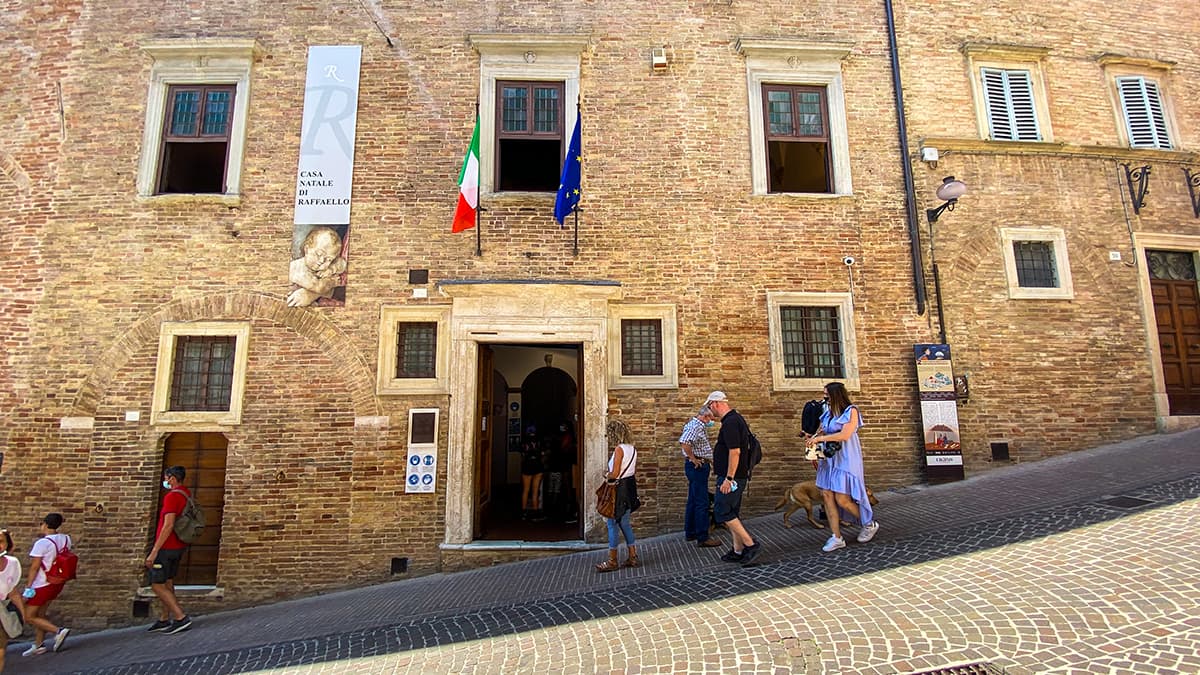 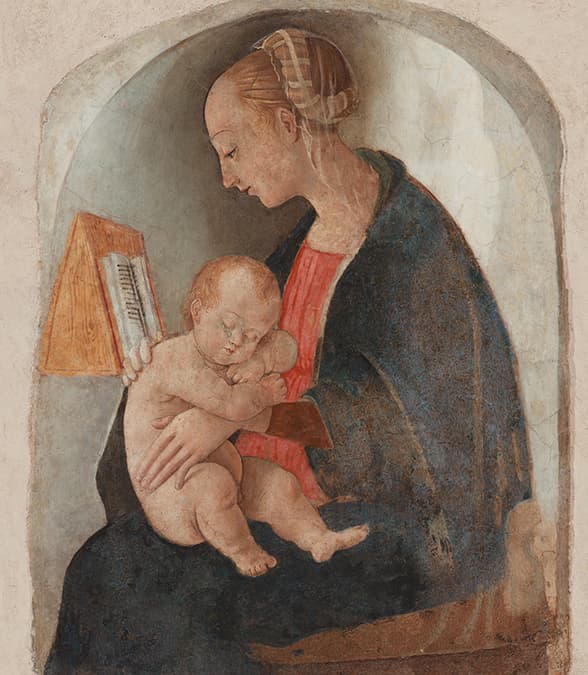 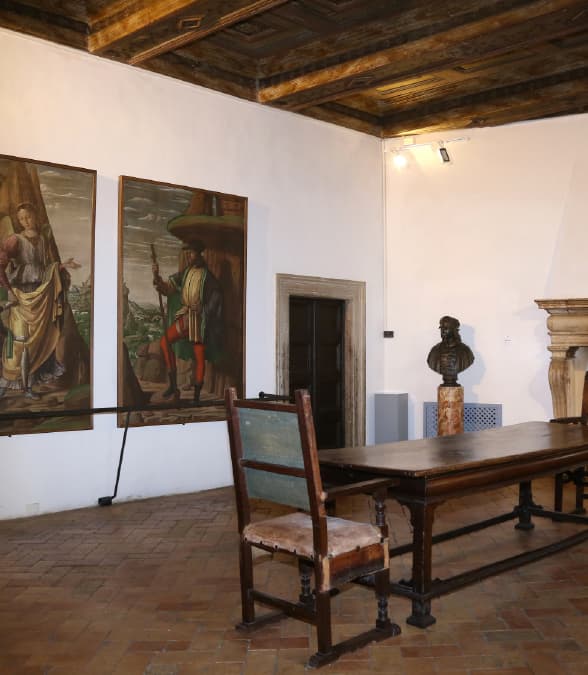 Federico di Montefeltro, condottiere and patron of the arts
Federico di Montefeltro was one of the greatest figures of the Renaissance and he made Urbino into one of Europe’s most important centers of culture. Federico came to power at just 22 years of age. The way was opened up to him by a conspiracy, organized by nobles in the city: the families of Urbino were tired of the continued abuses of power they suffered at the hands of the much-hated duke, Oddantonio di Montefeltro, just eighteen years old, and they encouraged the uprising that led to Oddantonio’s death. On 23 July 1444, the very day on which Oddantonio met his violent end, Federico was welcomed in Urbino, where he signed a pact to take control of his new domain. Federico di Montefeltro was a soldier and one of the most powerful commanders of his time. However, he was also one of the most enlightened men of the Renaissance. Together with his brother, Ottaviano Ubaldini della Carda and his wife, Battista Sforza, in just a few decades, he transformed a small town into a prestigious court, frequented by all the most important artists, architects, humanists, prelates, and ambassadors. Federico came to Urbino with the title of Count and on 23 August 1474, with a papal investiture, he was made a duke. In just a few years, he had extended his political alliances, expanded his Dukedom, and guaranteed stability and well-being for all of his subjects.
Architects and artists Piero della Francesca, Luciano Laurana, Francesco di Giorgio Martini, Leon Battista Alberti, Luca Pacioli, Paolo Uccello, Pedro Berrugete, Giusto di Gand, and Giovanni Santi all worked at his court. The symbol of Federico di Montefeltro’s cultural vision was the spectacular Ducal Palace and its marvelous Library, which contained some thousand manuscripts, decorated by the very best master illustrators of the period. It was thanks to Federico that Urbino became the capital of Humanist mathematics, of studies on art and perspective, and the very heart of the best in western culture. Federico di Montefeltro died on 10 September 1482, at the age of 60, leaving his duchy to his ten-year-old son, Guidubaldo. The new duke grew up under the care of Ottaviano Ubaldini della Carda, the most important figure at the Court of Urbino, ever-present and always perfectly in tune with Federico. The true alter ego of the Duke of Urbino. 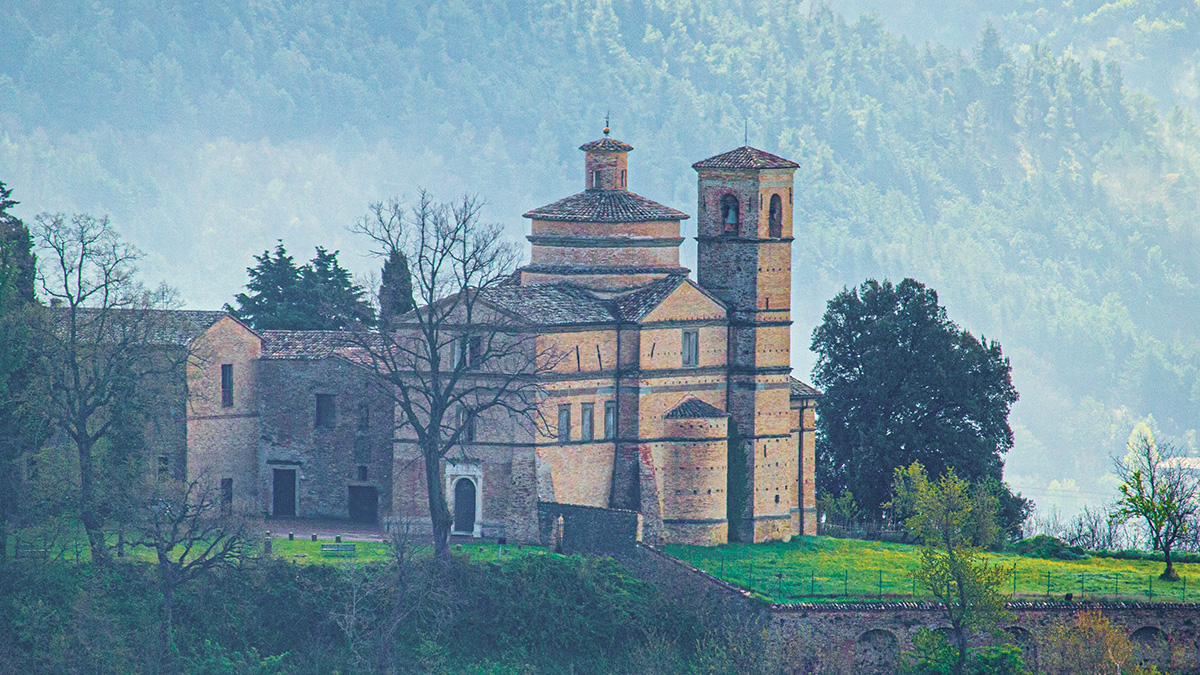 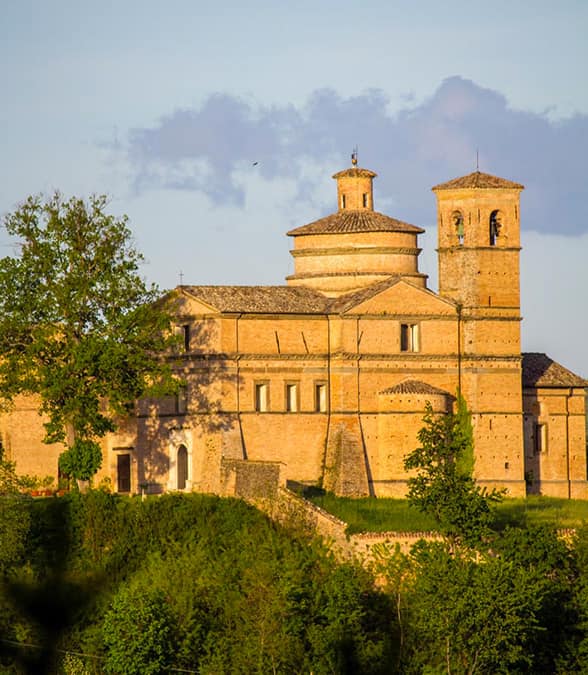 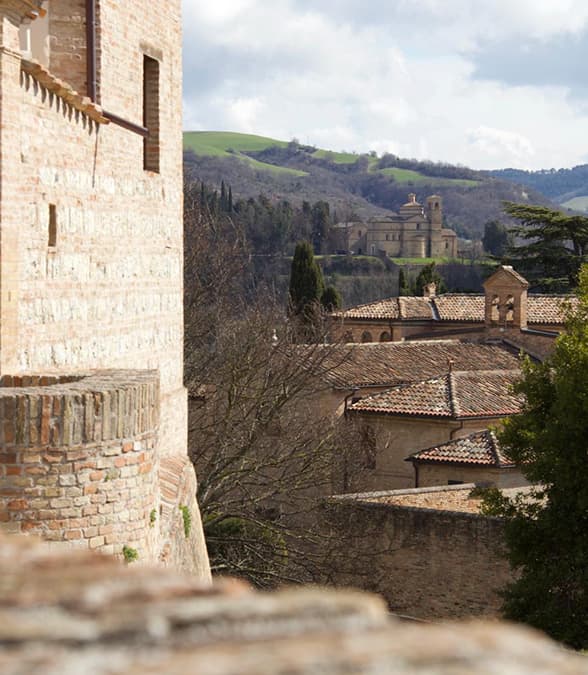 San Bernardino Church – Mausoleum of the Dukes
The Mausoleum of the Dukes is located approximately two kilometres from the old town, in the area of Cesane. Today the common trend is to attribute the building to Francesco di Giorgio Martini, as the general and particular details in the external part show the style of the Sienese architect. It was Federico da Montefeltro who wanted the building of a Ducal Mausoleum. However when he died (1482), the works were not finished (they were carried on until after 1491) and the Duke, waiting to be transferred, was buried in the nearby church of S. Donato.

Plan your stay in Urbino

Find accommodation
Send us a request